British boy band, ‘One Direction’ singer Louis Tomlinson has reunited with his girlfriend Eleanor Calder. Eleanor and Louis had waved an emotional good bye to each other 11 days back, when the singer had to leave for the North American One Direction tour. 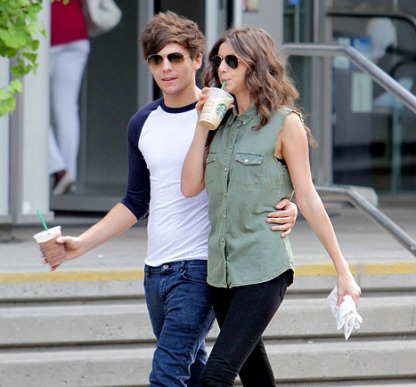 But then it was found that the two were apart for just five days after which the 21 year old student of Manchester University reunited with her 20 year old popstar boyfriend. The couple had a very romantic reunion and were seen together sightseeing at the Niagra falls in Canada on May 30, 2012.

But the romantic moment wasn’t so intimate for the couple, as the One Direction bandmates had also accompanied. After watching the falls from the Canadian side they also hoped on the popular Maid Of The Mist, wearing disposable water proof jackets to protect their clothing from fall’s spray.

Later the band mates were also seen at a local branch of Taco Bell on the Cave Of The Winds Tour. The two were seen having a great time in Canada after an awkward incident in New York on Monday. Louis and Eleanor alleged a waiter at the eaterie was incredibly rude and later Tweeted about it.