British pop star and recording artist, Melanie Brown on June 6, 2012 arrived in Manchester for the second day of auditions at the X Factor. The 37 year old singer, who is also a part of the Australian X Factor was seen in a simple outfit for the auditions. 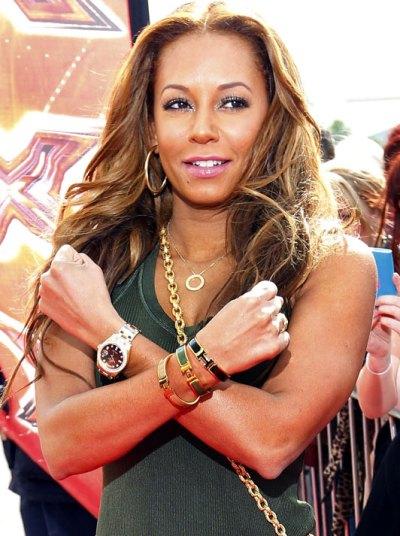 Mel B, wore a green vest top and trousers and added three Hermes bracelets and a matching belt. The singer joined Gary Barlow, Tulisa Contostavlos and Louis Walsh, the British Jury members of the X Factor for the Manchester Auditions.

Reports said that Mel was booed by the audience when she arrived on the first day on the panel. The singer displeased the crowd when she criticised one of the contestants from Birmingham called Lou. Mell said, “I wanted to fall asleep”. The other judge Tulisa was seen wearing a printed dress and a leather jacket along with black stilettos.

The Irish boy band manager Louis wore a pair of jeans and a blue jacket over a white shirt. The Former Take That star Gary Barlow wore a red t-shirt, blue jacket and coordinated trousers. While the X Factor host Caroline Flack showed up in a pink suit jacket and matching shorts.