The star of Britain’s Got Talent Pudsey the dog is now all set to become a Hollywood star. The reality TV star will be starring in an upcoming Hollywood movie which will be about a superhero canine. 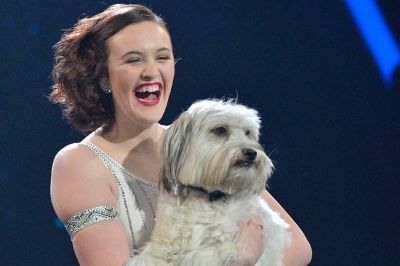 The popular dancing dog has bagged a role in a movie which is about a pooch which is seemingly just a normal beloved pet by day, but in the night it becomes an incredible hero. At present the film has a working title ‘Super Dog’.

Sources from the production unit have revealed that it is an action flick and due to which he can show his nifty moves. At present Pudsey is on tour with his teenage trainer Ashleigh in the US as she promotes herself for winning the reality show ‘Britain’s Got Talent’ earlier this year.

Ashleigh in the recent development is happy that her adorable pooch will be stepping up as a professional artist. The teenaged trainer of Pudsey said that she has also watched ‘The Artist’ and thought that it was an amazing film where Uggie was absolutely brilliant. Ashleigh said, ‘I think Pudsey would be perfect for that kind of thing because he loves film work and looking at cameras.’ Seems like the dancing duo are going to be busy hereafter,