British boy band One Direction has said that they have released their new single ‘Live While We’re Young’. The single will be available for pre-order from August 23, 2012. Earlier in the day the band announced that they cannot wait to announce the mystery news. 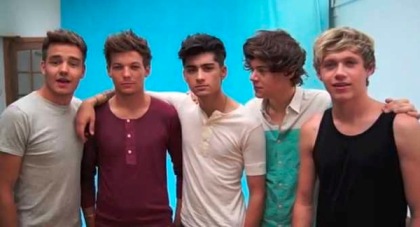 One Direction, on August 22, 2012 tweeted, “Who’s ready for the big announcement? Today at 1pm UK time Directioners!! Bring. It .On! 1DHQ x”. The band later confirmed that they would confirm the news at 1 pm this afternoon. The One Direction boys also posted a video to their fans with a caption which said, ”Here it is…The #1DBigAnnoucement from the boys!! Watch it now to check out their MASSIVE news!! 1DHQ x”. The new single will be available to pre-order from iTunes on August 23, 2012 and can be bought on September 30, 2012.

The video which the band posted for their fans has the boys thanking their fans for their continued support over the past year. The new single is the first track from their upcoming album which is due to be released in the month of December.

One Direction is a British band who released their debut album ‘Up All Night’ and became the fastest selling album in the UK.