The usual complaint of shoppers around the holiday season is that the cost of daily goods keep rising. However, in some relief for consumers this year, there will be at least one holiday blessing to be thankful for, as there will just be a marginal rise in the cost of  the Thanksgiving dinner. 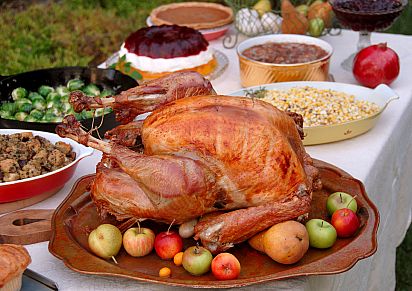 The American Farm Bureau Federation’s Survey reported that turkey dinner and all fixings will cost about $49.48, or just 28 cents more than it did last year. However, the situation wasn’t the same last year, as consumers were hit by one of the biggest price increases for traditional Thanksgiving trimmings in quite some time.

The price rise was also due to the poor weather, as crops were affected, shrinking output. This year however, the main component for any Thanksgiving dinner table – the turkey, is a major reason for the marginal cost increase. If the prices of turkey did not increase, the cost of dinner this year might have actually been lower.

John Anderson, the Deputy Chief economist at the AFBF said, “Most Americans will pay about the same as last year at the grocery store for a turkey and all the trimmings”. Anderson added that a slight increase in the demand for turkey is responsible for the moderate price rise.