On August 11, 2013, American actress and singer Lea Michele was honored with the Best TV actress award at the Teen Choice Awards. The actress, while accepting the award, tearfully dedicated the honor to her late co-star and boyfriend Cory Monteith. This was the first public appearance for Michele since the death of Cory Monteith. 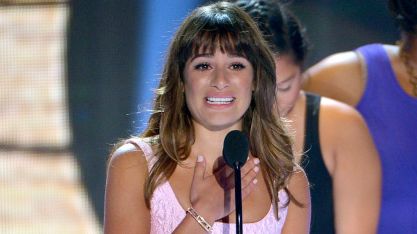 The 31-year-old actor was found dead in his hotel room in Vancouver in July 2013. After an autopsy was conducted, it was revealed that the ‘Glee’ actor died from an overdose of heroin and alcohol. In 2010, Monteith co-hosted the Teen Choice Awards. The actor played the role of Finn Hudson on ‘Glee’ and was in an on-off relationship with Michele’s character, Rachel Berry.

Michele took to the stage in tears and was seen wearing a necklace which said ‘Cory’. The actress said, “I just wanted to be here today to personally thank all of you and tell everyone out there how much all of your love and support has meant to me over these very difficult past few weeks.”

Meanwhile, the popular musical show earned the award for best comedy. While accepting the honor, Amber Roley – who plays the role of Merceded Jones – said that they are fortunate to come back to the show where they feel the love of family.