Even though sales of the electric cars have slowed down, Ford has decided to launch its Focus Electric model for the UK market on September 5, 2013. The new Focus Electric has battery power, which can run up to 100 miles on a single charge and has a top speed of 85 mph. 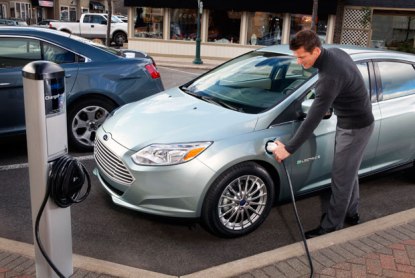 The new Focus has been priced at £28,500 despite receiving the government grant and will cost twice as much as the cheapest petrol-powered Focus. The UK government launched a grant scheme in January 2011 and since then, 4,500 electric cars have been sold in the UK. On the other hand, 65,000 conventional new cars were sold in August 2013 alone. The new Focus Electric has been able to impress critics, as opposed to its other competitors like the Nissan Leaf, which went on sale in 2011.

The experts have appreciated the new Ford vehicle and have described it as a great new electric car which can be enjoyed and savoured. A spokesperson from Ford said, “Ultimately Ford have now electrified one of the best-selling cars in Britain. It is a very popular business and family car.”

However, the Focus Electric also has to face competition from other electric launches, like the BMW i3 which has a range of about 80-100 miles and will cost £25,680 after the grant of the government.