As Halloween approaches, the most anticipated costume of 2013 is garnering plenty of buzz and is selling out fast. American singer Miley Cyrus’ controversial outfit – which she wore for her scandalous performance with Robin Thicke at 2013 MTV VMAs – is the most popular Halloween costume in 2013. 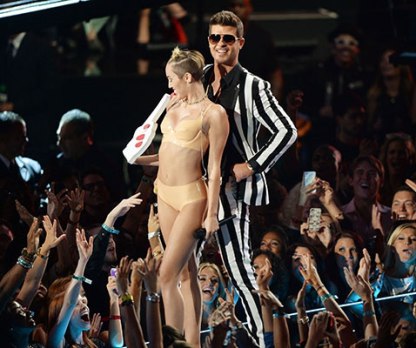 The ‘Wrecking Ball’ singer’s raunchy and barely-there outfit from the awards show has become the talk of the town. The young star stripped down from her teddy bear suit to her almost-naked outfit in just a few minutes and was then seen dancing seductively with the ‘Blurred Lines’ singer, wearing a red-nail foam finger on her hand.

Due to her shocking stint at the VMAs, the ‘Can’t Be Tamed’ singer received a new title and has now become the most popular Halloween costume of 2013. Cyrus’ girl-next-door ‘Hannah Montana’ costumes are bound to stay in the closet and the new outfit has become the most popular one and can already be purchased online, as well as from the stores. The popular online shopping site Amazon.com has provided a complete list of vendors who are selling different versions of the outfit, in order to create the perfect look for the upcoming Halloween.

Even the red-nailed foam finger has become very popular and is one of the top-selling products at the moment. The look can be completed with a pair of white sneakers and a bold red lipstick.