Forecasters in the UK have predicted that the country might be facing the worst storm of 2013. The unpredictable weather in the country is likely to continue in the next couple of days, which will include strong winds and heavy rain, especially during the upcoming weekend. 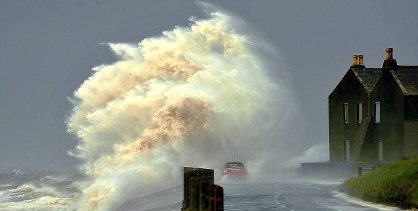 The weather on Sunday night on October 27, 2013 might even worsen, as a huge storm system is developing in the Atlantic. The storm is most likely going to intensify before it travels across England and Wales on Monday, October 28, 2013. Juliet Gardner, the Met Office spokesperson said that the UK forecasters issued a warning and a yellow alert has been issued by the highways agency.

Gardner added, “If the storm arrives in line with current predictions then some areas along the south coast could see some of their strongest winds for a number of years”. She also said that the winds can potentially get up to 8o mph and the storm can even damage certain properties.

The Chief Forecaster at the Met Office, Eddie Carroll said that the storm currently does not exist, but the forecast models predict that it will most likely going to develop in the west Atlantic on Saturday, October 26, 2013. In such situation, people need to be up to date or act on the advice in the forecasts and warnings.