British-American historical drama ’12 Years A Slave’ became the big winner at the 2014 BAFTA Awards, when it was crowned Best Film at the Royal Opera House in London on February 16, 2014. In addition to that, the lead actor from the movie, Chiwetel Ejiofor won Best Actor during the ceremony. The 36-year-old star was presented with the award by Hollywood actress Uma Thurman. 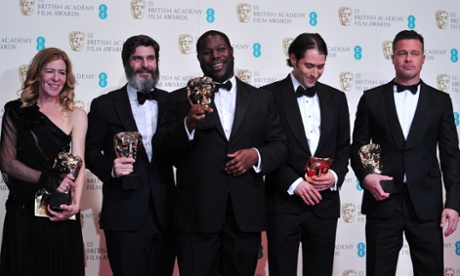 Ejiofor expressed that he was, “so deeply honored and privileged to receive it”. The director of the movie, Steve McQueen accepted the award and told the audience, “There are 21 million people in slavery as we sit here. I just hope 150 years from now our ambivalence will not allow another film-maker to make this film”. The 67th annual awards ceremony was hosted by actor Stephen Fry.

The Duke of Cambridge, Prince William was one of the guests and he presented the Fellowship award to Dame Helen Mirren. Prince William called Mirren ‘an extremely talented British actress’. Meanwhile, the 3D science thriller ‘Gravity’ – which stars Hollywood superstars Sandra Bullock and George Clooney – was nominated in 11 categories and claimed six awards.

‘Gravity’ managed to cause some controversy at the awards by being listed as British movie, but it was filmed in the UK and the team handling visual effects are based in the country.