Pies and pastries retire as Dosants, Duffins and Cronuts take over the food scene.

The global gastronomical landscape is being dotted with new and innovative hybrid foods. Its quite difficult to point out where exactly this new fad begun, but we do know that its spreading like wild fire. Here are a few examples of new born foods which are taking London’s restaurants by storm!

‘Townie’ is a brownie slash-tart, ‘Duffin’ is a fusion of doughnut and a muffin and ‘Dosant’ is a half doughnut and half croissant. These particular cross-bred pastries are becoming a hot favorite amongst Londoners. 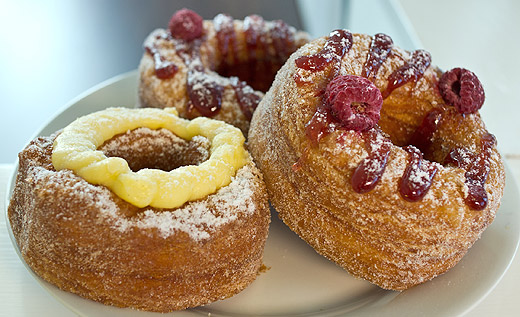 The market for cup cakes peaked and fell during the 90s and now some of these new trendy delicacies are replacing the traditional desert spread.

A whoopee pie which has two soft cookies sandwiched with cream frosting and cake pops which are artfully shaped cakes on a lollypop stick, pizza fries – pizza base topped with fries and pizza toppings- are all crawling up the food rung with great gusto.

Amongst all these, the latest craze is the Cronut –  half doughnut and a half croissant – created by French baker Dominique Ansel.

Since the month of May, 2014, cake crazy Londoners have sacrificed their sleep to stand in a queue outside Ansel’s Soho bakery hours before it opens.