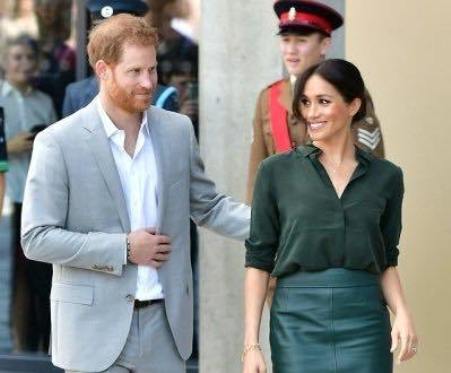 The Royal Couple Prince Harry and Meghan Markle got married in a royal wedding ceremony in May, 2018. The couple is now expecting their first child together. Kensington Palace released a statement to reveal the news.

The statement said, “Their Royal Highnesses The Duke and Duchess of Sussex are very pleased to announce that The Duchess of Sussex is expecting a baby in the Spring of 2019.” The statement from the palace also thanked the public for their unconditional support. Kengsington Palace statement added, “appreciated all of the support they have received from people around the world since their wedding in May and are delighted to be able to share this happy news with the public”.

The news was announced as soon as they arrived hand-in-hand to begin their 16 day royal tour around Australia. Meanwhile, the Queen and other senior royals were also informed about the news on October 12, 2018. The members of the royal family gathered at the Windsor for Princess Eugeine’s wedding.

Harry and Meghan attended the wedding in a long dark blue coat and this led to speculations that she could be expecting. Meghan was seen trying to hide her stomach as she arrived for the 16 day tour to Australia – Fiji, Tonga and New Zealand. Reports say that the Duke and Duchess had decided to inform the most senior members of the royal family on the occasion. The people who were informed included the Queen, Duke of Edinburgh, Prince of Wales, Duke and Duchess of Cambridge and the Duchess of Cornwall. Prince Harry and Markle chose the day to spread the happy news and then recover and relax, get on plane and then sent out the news for the rest of the world. The tour also marked the first official tour as royals for Prince Harry and Meghan Markle.