The Thai troops open fired rubber bullets and shots in the air against a crowd of 2000 red shirts in Bangkok city today. Out of the crowd, around 100 protesters charged against the police and the military, but they pushed them back with good retaliation. 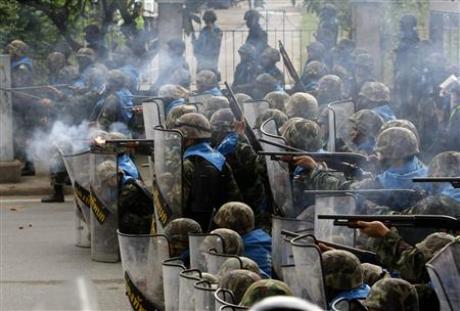 In the chaos it is said that one of the soldiers was shot in the head and it seems he is dead, and around 10 protesters are admitted in the Bhumibol Airforce Hospital in north Bangkok today. The main convoy started around 8 mile behind the scene of the clash. Now with almost seven weeks into the dreaded situation, the violence has killed around 25 people and as many as 900 wounded. This is literally destroying south east Asia’s largest economic country.

The troops say that the situation got even worse when the Prime Minister denied the request of the Protesters of having an election in 3 months, which then led a failed peaceful operation by the army against the red shirts, resulting of many casualties. Analysts say if the protests and law keeps deteriorating for weeks then the Capital will suffer with consumer inconfidence and tourist industry crash.