Memorial Day 2010: Barack Obama, on this years Memorial day, is all set to pay his respect to America’s war dead. 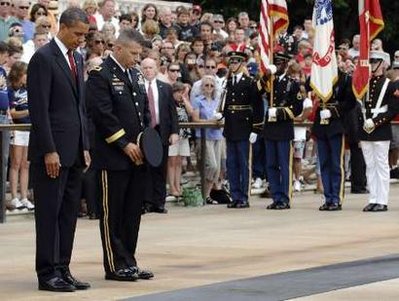 The schedule of President Obama on Memorial Day consists of observance at the Abraham Lincoln Cemetery situated in Elwood, Illinois, on this years Memorial Day 2010.

Its a tradition that the Presidents of the United States participating in the annual Memorial Day held at Arlington National Cemetery, Washington. Obama did that as President for the 1st time last year.

Many veteran groups have criticized President Obama as he will not be appearing at the Arlington National Cemetery this year. This year Vice President Joe Biden will go instead.

Some veterans groups have criticized Obama for not appearing at the nation’s most hallowed burial ground this Memorial Day. Vice President Joe Biden will help lay the wreath at Arlington instead.