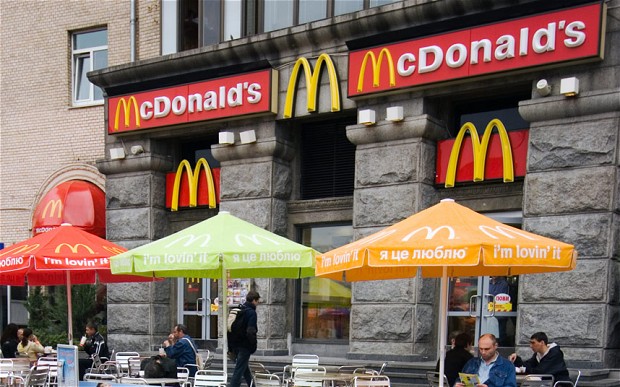 Fast Food giant McDonalds is all set to expand its wings in Russia, where it will be opening 20 restaurants. The decision has been taken a year after it was caught amidst the ruining relations between Washington and Moscow.

The fast food giant has signed a deal with the local GiD that will help to extend the restaurants of McDonalds in to western Siberia in the near future. The new move has also been taken as the fast food giant is looking forward to improve its sales figures and reputation across the globe. More and more consumers are now opting for healthier foods and the recent food scandals have contributed in spoiling its name.
However, it is not going to be a cake walk in Russia for McDonalds. In 2014, the EU and US were announcing sanctions against the Russian companies and McDonalds found itself entangled in to extensive investigations in to food safety standards. The fast food giant had also faced a temporary closure of 200 of its more than 500 restaurants.
The restaurants which have been a subject to closure have been reopened since then. This had also resulted in a closure of more than 100 court cases related to the findings of the probe.