McDonalds Shrek Glass Recall, Cadmium Poisoning: American burger giant, McDonalds, has recalled almost 13.4 million of the ‘Shrek’ themed drinking glasses, after they were warned by US Consumer Product Safety Commission to stop using them, due to the presence of a toxic metal called cadmium. Cadmium was found on the glasses in the paint used in designing the movie characters, which resulted in cadmium poisoning cases and a McDonalds Shrek glass recall on Friday. 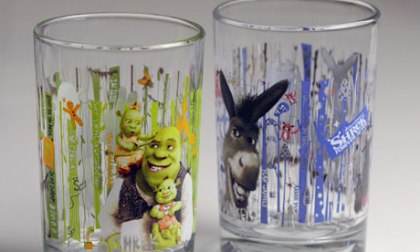 The McDonalds Shrek glasses contained very small amounts of the toxic metal, but keeping in mind children’s safety, McDonalds and US Consumer Product Safety Commission worked together on the recall. Around 12 million glasses were pulled out from the US McDonald’s outlets and some 1.3 million from Canada.

The CPSC officials stated that, cadmium, found on the surface on the glasses may be of small quantities, but long term exposure or contact can cause adverse effects. Cadmium consumption can lead to problems like bone softening and kidney disorders. No such reports of injuries or incidents have been reported in the relation with the glasses, but still this move had to be taken as a precautionary measure.