British author illustrator and author, Edward Lear has been honoured with a green plaque in London. The plaque was unveiled on May 12, 2012, on the day which would have been his 200th birthday. 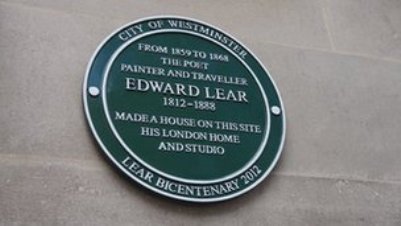 The plaque has been placed at 15 Stratford Place in Westminster in London. The place is a site were the author lived from 1853 to 1869.

The new plaque has been placed at the Westminster Council’s scheme to mark buildings which are associated with people who have made some remarkable contributions to the society. The artists was born in Holloway and was brought up in Grays Inn Road.

The author is known for writing the Owl and the Pussycat. Robert Davis, the council’s deputy leader said, “Edward Lear was one of the finest artists of his generation and anyone who has ever raised a smile to a cheeky limerick has Lear to thank for his creativity in popularising the poem”. Davis added that the author travelled extensively and worked all over the UK and Europe. The council leader also said that this was the perfect day to pay tribute to him which could have been his 200th birthday. Till now 97 plaques have been put at the council honouring people.