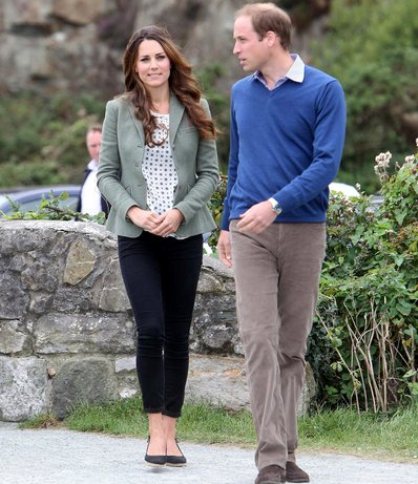 The Duchess of Cambridge accompanied Prince William as he started off the Ring O’ Fire ultra marathon in Anglesey, Wales, where she chatted about babies with people. Media reports quoted Kate saying that their 5-week-old baby is doing well and that her mother, Carole Middleton was taking care of him. While talking about the baby, Kate said that he is with his granny and is sleeping well, but those things tend to change pretty quickly.

At the event, Kate was seen wearing a silk Zara blouse, a green Ralph Lauren blazer and Paige skinny jeans. The Duchess was seen standing alongside her husband as he rang a bell to begin the 135-mile race around the island of Anglesey. The couple is currently living there.

The Duchess was initially not going to attend the event, but she wanted to take the opportunity to thank the people of Anglesey herself for the warmth and hospitality that they showed to the couple. The Duchess is next due to attend the inaugural Tusk Conservation Awards with William on September 12, 2013.