The new Arizona Immigration Law SB1070 is being publicly opposed by people from across the world – the most famous being latino singer Shakira and Meghan McCain. 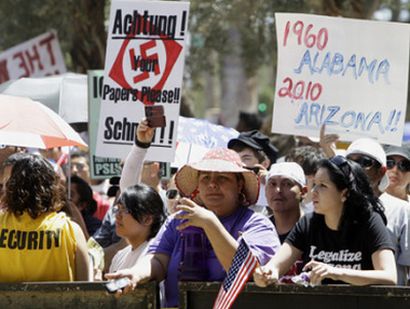 Just last week, we saw the Arizona Immigration Law SB1070 being signed by Gov. Jan Brewer. This new law permits the police to investigate the residency status of any person that they suspect to be residing illegally in the United States of America.

Sources say that Shakira is so unhappy about the new law, that she is reportedly meeting with Mayor Phil Gordon in Phoenix on Thursday to talk about the opposition she has to the new Arizona law.

Even Meghan McCain, the daughter of Arizona Senator John McCain, has opposed the bill, and said that that the problem needs to be fixed at the border, instead of forcing every immigrant to carry their papers with them at all times.

US President Barack Obama is also reported to have called the Arizona immigration law sb1070 “misguided”, and has asked that the Justice Department take a look at the bill once again so that they can determine the consequences.