A police officer and a group of Latinos are some of the first people to challenge the new Arizona Immigration Law. 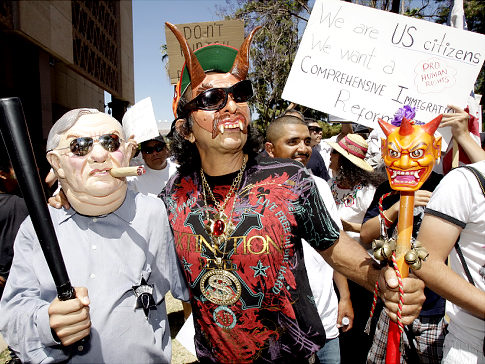 Reports say that the first person to challenge the law is a fifteen year veteran police officer by the name of Martin Escobar, who states that there is no way a police officer can ask for a person’s immigration status until and unless there is a concrete evidence against him. The second challengers are a group of Latino Clergies who are seeking injunction against the law.

Besides this, there are also other Hispanic groups like the American Civil Liberties Union and the Mexican American Legal Defense who plan on stalling the new law. Reports also say that a certain group has filled papers to launch a referendum drive that could put the law on hold till 2012.

The new Arizona Immigration law sparked the interest of conservative groups who want to come up with a similar type of law in other states like Oklahoma, Minnesota and Colorado.

Not only are the politicians in the race to solve this problem, but even Colombian singer Shakira has plans to visit Arizona’s police department in relation to her opposition of the Arizona law, saying the law will promote racial discrimination.