A U.S Military Boeing C-17 cargo aircraft crashed with four people on board, on the outskirts of Anchorage at Elmendorf Airforce Base in Alaska on Wednesday. Airforce authorities say that all four on board died. 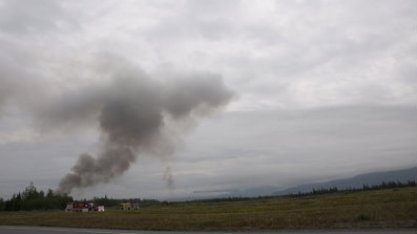 The military cargo plane took off from the airforce base on a regular training run on Wednesday, but later crashed on the airfield at Elmendorf. In a press conference, Lt. Gen. Dana Atkins, stated that the C-17 is not an ejectable aircraft, and hence there was a chance that no one escaped.

Col. John McMullen, 3rd Wing commander said in a statement: “Our deepest sympathy and sincerest condolences go out to the family and friends of those Airmen killed in this crash. Yesterday, we lost four members of our Arctic Warrior family and it’s a loss felt across our entire joint installation.”

Reports say that the plane belonged to the 3rd Wing of the Elmendorf Airforce base and was training for an air show this weekend. This has been reported to be the third plane crash in Alaska this summer.

The C-17 is an extra large cargo carrier airplane commissioned with the U.S Army.