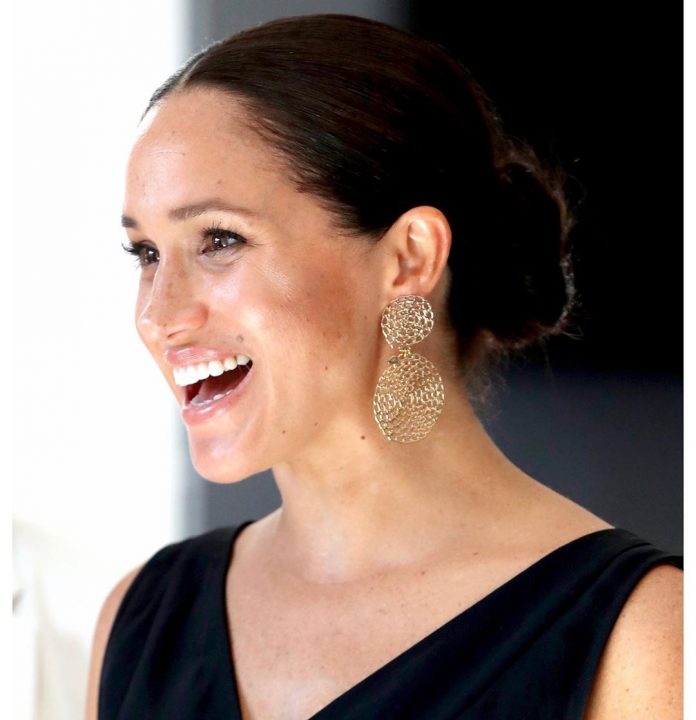 The Duchess of Sussexx, Meghan Markle, who is expecting her first child with Prince Harry, is known for frequently breaking the Royal protocol. The former Hollywood actress recently made an unannounced appearance which is against the Royal protocol. The Duchess made an appearance at the British Fashion Awards at Royal Albert Hall in London on December 10, 2018. Meghan’s attendance at the event had a special reason as she wanted to honor her wedding dress designer Clare Waight Keller, artistic director of Givenchy, with the British Womenswear Designer of the Year Award.

Meghan for the event was seen wearing a black silk Givenchy gown and honored Clare Waight Keller with the British Womenswear Designer of the Year award. Meghan styled her hair with a neat bun with gold heels and bracelets. The former actress while interacting with the audience at the Royal Albert Hall said, “It is such an honor to be here celebrating British fashion and British fashion designers in my new home of the UK”.

Soon after making her appearance, Meghan broke two royal protocols. Markle remembered her good old Hollywood days and let her guard down in a candid photo booth moment with Waight Keller and Pike. Having candid photo booths are common at Hollywood parties but is something that has never been seen at the royal events. The Duchess was seen in a black and white boomerang session while she gently caressed her baby bump. Moreover, everyone is aware of the fact that the Royal family have got some unofficial fashion rules which have been followed since decades. Meghan Markle broke one such protocol by wearing a dark nail color.

Meghan probably, wanted it to match with her gown, but might not have gone down well with the royal fashion police. Queen Elizabeth has always worn natural skin color nail color at public appearances. Despite the fact that it is an unofficial rule, everyone knows that the Queen finds dark nail colors distracting.