It was the Funeral service of civil rights icon, Dr. Dorothy Height at the National Cathedral in Washington and one could see US President Obama with a few tears in his eyes. 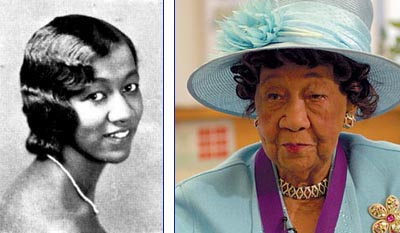 The others that were seen at the funeral service were Secretary of State Hillary Clinton, Speaker of the House Nancy Pelosi, Rev. Jesse Jackson, boxing promoter Don King and reality star Omarosa Manigault-Stallworth  among others. Poet Maya Angelou read a psalm and singer BeBe Winans sang.

President Obama described Dorothy Height as “a drum major for justice” during his eulogy, and he also said that she had visited the White House not only once or twice since he’s been in office, but at least around 21 times.
“We came to love her,” he said, of getting to know Height with Michelle Obama. “We came to love her stories. We loved her smile. We loved those hats she wore. Regal.”