UK Today News: Automobile manufacturing giant Hyundai has announced that the i40 Tourer will hit markets in the UK in the month of September 2011. The car would be available in three trim levels, Premium, Style and Active. 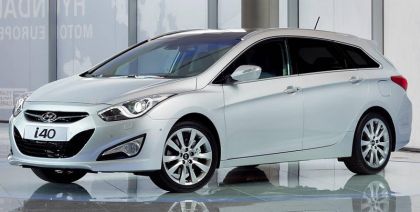 New reports state that all the three versions of the Hyundai i40 Tourer will be powered with a 134 bhp 1.7 litre CRDi turbo diesel engine. However, there is also an option in the Active and Style version, where the customer will be offered 1.6 litre GDI petrol and a 114 bhp offered in the Active version.

The Active version will have 16” alloy wheels. The other features include voice recognition, Bluetooth connectivity, leather steering wheels with audio controls, led indicators on the electric heated door mirrors, electric parking blade along with automatic hold function and electric rear and front windows.

The features of the Style version include, front and rear parking sensors, touch screen satellite navigation, rear view camera, dual zone climate control, cruise control, key-less entry and a panoramic sunroof. The i40 will be priced from £18,395. The Premium cars can be added with the extra specifications such as parking assist, heated leather steering wheel, ventilated front seats and lane departure warning only on extra costs.

Hyundai has also announced that the four door saloon i40 will be launched later this year in the United Kingdom.