It is one of the most difficult jobs in the world to choose sixteen among 89 of the world’s sexiest, sultriest and hottest girls. However, the 10 judges of the Miss Universe 2012 pageant had to do just that at Planet Hollywood on Thursday December 13, 2012 for the preliminary elimination round of the competition. 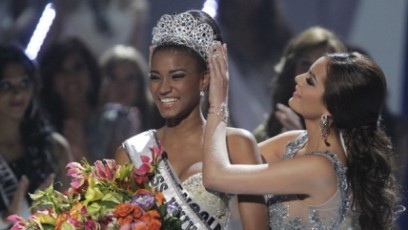 The most glamorous girls from all corners of the world sizzled throughout the evening, equally comfortable in the tiniest two pieces and high-slit evening gowns or cocktail dresses. They moved with elegance, sparkling and radiating in beauty and confidence and won and shattered the hearts of the audience members.

Each one of the beautiful women seemed to have the potential to be the winner, yet the judges had to take a decision which will be disclosed on Wednesday. The results are still concealed safely in an accounting company’s guarded safe. Alongside their mesmerizing beauty, the judges also considered their charisma, intelligence, persona and elegance.

There were a few favorites for the evening such as Miss USA, Miss South Africa, Miss Georgia, Miss Philippines, Miss Sri Lanka, Miss Paraguay and Miss Bolivia among others.

The envelopes will be opened and the finalists’ names will be announced after a week of anticipation on December 19, 2012. All contestants, including the 73 who would not be able to make it to the final round of the competition, will witness one among them embracing the much coveted title of Miss Universe 2012, to be crowned by the current title holder Lila Lopes of Angola.