The Duchess of Cambridge and Prince William are now proud parents of a baby boy, born on July 22, 2013 in London. The much-awaited news of the birth of the royal baby was announced by Kensington Palace, by releasing an official statement. 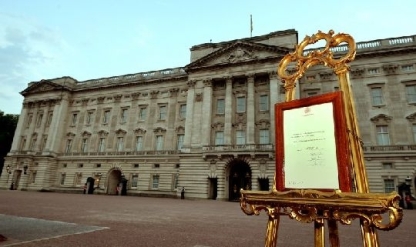 In a statement, the palace said, “Her Royal Highness The Duchess of Cambridge was safely delivered of a son at 4.24 p.m.” The official statement went on to say that the Duke of Cambridge was present for the birth and that other members of the royal family, including the Duke of Edinburgh, the Queen, the Duchess of Cornwall, Prince Harry, as well as the members of Kate’s family have been informed and are delighted with the news.

The statement also said that the Duchess of Cambridge and the baby are doing fine and will remain in the hospital overnight. Prince William, in a short statement released by the palace, said that they could not be happier and that he will be spending the night with his wife and son at the hospital. When the baby was born, cheers erupted at the hospital, after which Buckingham Palace released the official announcement.

Huge crowd of people gathered outside the palace to wait for the formal, signed birth announcement, which was driven from the hospital to the palace.